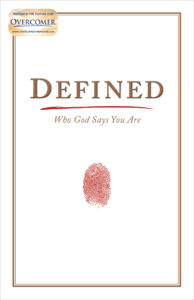 OVERCOMER, the highly anticipated sixth film from Alex and Stephen Kendrick (WAR ROOM, FIREPROOF, COURAGEOUS, FACING THE GIANTS, FLYWHEEL) will debut in theaters nationwide on Aug. 23, 2019 from AFFIRM Films, a Sony Pictures Entertainment Inc. (SPE) company, and Provident Films. OVERCOMER follows on the heels of the Kendricks’ 2015 hit WAR ROOM, which was the #1 movie in theaters across North America in its second week of release, surprising Hollywood by bringing in more than $70 million at the box office.

The film is accompanied by a suite of products releasing this fall from B&H Publishing Group, including a trade book by New York Times best-selling authors Alex and Stephen Kendrick titled Defined: Who God Says You Are, a trade book titled Radiant by New York Times best-selling author Priscilla Shirer, who plays a principal character in the film, plus two full Bible study suites, books for children and teens, and other resources.

“B&H is thrilled to partner again with the Kendricks to provide resources that enrich the viewers’ experience,” said Jennifer Lyell, VP for Book Publishing and Merchandising with B&H Publishing Group. “Our products tied to their past films, most recently WAR ROOM, were New York Times best-sellers and we believe these OVERCOMER products will help readers connect deeper with the themes explored in the film and be equally successful in terms of sales.” OVERCOMER is a live-action family film that dares to leave viewers filled with hope, inspired to dream, and asks the question: What do you allow to define you? “The movie is about identity, an issue that everyone deals with,” said writer and director Stephen Kendrick. “When a person discovers who they are in Christ, it opens up an understanding of how they can live that out in a daily basis. The resources from B&H will help readers do just that.”

In the film, life changes overnight for coach John Harrison when his high school basketball team’s state championship dreams are crushed under the weight of unexpected news.  When the largest manufacturing plant in town suddenly shuts down and hundreds of families begin moving away, John must come to grips with the challenges facing his family and his team. Urged by the school’s principal to fill-in and coach a sport he doesn’t know or like, John is frustrated and questioning his worth… until he crosses paths with a student struggling with her own journey.

Filled with a powerful mix of faith, a twist of humor, and a ton of heart, OVERCOMER will open nationwide in theaters on August 23.

AFFIRM Films and Provident Films partnered with the Kendricks on the film.

AFFIRM Films produces, acquires and markets films that inspire, uplift and entertain audiences around the world. Since releasing its first theatrical film—The Kendrick Brothers’ drama FACING THE GIANTS, in 2007, AFFIRM Films has released numerous quality faith-based films including SOUL SURFER, WHEN THE GAME STANDS TALL, WAR ROOM, which hit No. 1 on the domestic box office chart; RISEN, and was the faith-based marketing partner with Columbia Pictures and TriStar Pictures for their films MIRACLES FROM HEAVEN and HEAVEN IS FOR REAL. AFFIRM Films also released ALL SAINTS, the animated film, THE STAR, in partnership with Sony Pictures Animation and Columbia Pictures, in 2017, and PAUL, APOSTLE OF CHRIST in 2018. AFFIRM will release the highly anticipated next Kendrick Brothers’ film OVERCOMER on August 23, 2019. AFFIRM Films is a division of Sony Pictures Worldwide Acquisitions (SPWA), a Sony Pictures Entertainment Inc. (SPE) company. AFFIRMFilms.com

Kendrick Brothers Productions is the company of brothers Alex, Stephen and Shannon Kendrick that exists to honor God and share the truth and love of Jesus Christ through movies, books, curriculum and speaking. By blending engaging stories with doctrinal integrity, the Kendricks seek to encourage and inspire audiences with resources that positively impact their lives and strengthen their faith, families, and personal relationships.

Defined: Who God Says You Are

Radiant: His Light, Your Life (for teen girls)

Revealed: Discovering Your True Identity in Christ (for teen guys)

Defined: Who God Says You Are Bible Study

Wonderful: The Truth About Who I Am (for middle-grade readers)

What’s So Wonderful About Webster?