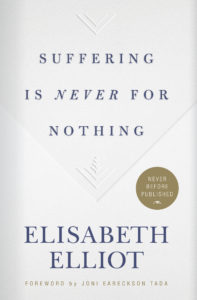 Elisabeth Elliot (1926-2015) was a prolific Christian author and speaker whose first husband, Jim Elliot (1927-1956), was one of five missionaries killed as he sought to make contact with an unreached village in Ecuador to share the Gospel with the Waorani Indians. Elisabeth and her then three-year-old daughter Valerie later moved into that same village and spent two more years sharing the Gospel and living among those that killed her husband.

After her return to the U.S., Elisabeth began a speaking and writing ministry, writing twenty-five books and eventually becoming the first female bestselling Christian author and one of the most influential Christians of the twentieth century.

The never-before-published message “Suffering is Never for Nothing” was Elisabeth’s last teaching on suffering, a subject with which she was deeply acquainted. Having lived through great loss during her lifetime, Elisabeth teaches powerfully on God’s grace in the midst of hardship, fulfilling the high calling of Titus 2, trusting through trials and how often through the deepest suffering that God teaches us the deepest lessons.

“Suffering is Never for Nothing” uncovers the truths about suffering which led Elisabeth to be able to say, “Whatever is in the cup that God is offering to me, whether it be pain and sorrow and suffering and grief along with the many more joys, I’m willing to take it because I trust Him.” B&H will also release “Devotedly: The Personal Letters and Love Story of Jim and Elisabeth Elliot” (February 1, 2019), a collection of never-before-published letters and private journals that capture in first-person intimacy the attraction, struggle, drama and devotion that became a most unlikely love story. “Devotedly” chronicles the Elliots’ six-year courtship, with narrative and anecdotes added by Valerie, showing the Elliots’ hearts, hard-fought purity, lived-out truth and unending devotion.

“I feel so privileged to be able to get this book [Devotedly] published, trusting that God allowed my mother to give me my father’s letters to her,” Valerie said. “[My mother] then gave me all her journals, and then to find her letters, which she had forgotten she saved, was a miracle and an amazing gift to me. I truly believe many people will be inspired and spurred on to love God and do His works by their story. What a challenge they lived out for us to follow, and I can only say, may this book call all of us to higher obedience.

B&H is supporting these two volumes with influencer marketing, national publicity, digital ads, store signings and a long-form video discussing the lives of the Elliots and Valerie’s upbringing.

For more information about “Devotedly” and “Suffering Is Never For Nothing,” visit www.elisabethelliotbooks.com or www.devotedlybook.com.

In 2020, B&H will release an authorized biography of Elisabeth Elliot, authored by esteemed biographer, Ellen Vaughn.

“It could be argued that no single modern event propelled more individuals to missionary work than then deaths of Jim Elliot and his friends in Ecuador. Their stories would surely have been known no matter what happened afterward, but it was through Elisabeth Elliot’s pen that the story reached the globe,” said Jennifer Lyell, VP of Book Publishing and Merchandising for LifeWay Christian Resources.

“From that, thousands were called into ministry and sought to live more faithful lives. And from that, another ministry was borne—that of perhaps the most prolific female Christian writer of the 20th century. We are humbled by the sacred honor of bringing this incomparable unpublished work from Elisabeth to print and by the incredible privilege of partnering with Valerie to tell her parents’ story. While generations have already been moved by the lives and ministries of these faithful believers, we pray that these new resources will compel a new generation to learn from them and thus be faithful regardless the circumstance.”

Elisabeth Elliot was one of the most influential Christians of our time and the first bestselling Christian woman with millions of books in print. For more than a half-century, her bestselling books, timeless teachings, and courageous faith have influenced believers and seekers of Jesus Christ throughout the world. She used her experiences as a daughter, wife, mother, widow, and missionary to bring the message of Christ to countless women and men around the world.

Valerie Elliot Shepard was born in Ecuador in the home of a jungle doctor. She was only ten months old when her father, Jim Elliot, was killed by Auca Indians he was seeking to reach with the gospel. She spent her childhood there, while mother, Elisabeth Elliot, ministered to the tribe who killed her father, not returning to the States until she was eight years old. Valerie graduated from Wheaton College in 1976, and has written a children’s book (“Pilipinto’s Happiness”) containing memories of her Amazon upbringing. She and her husband, Walt, a minister whose parents were missionaries in the Congo, have eight grown children. Their home is in the small coastal town of Southport, North Carolina, near Wilmington.